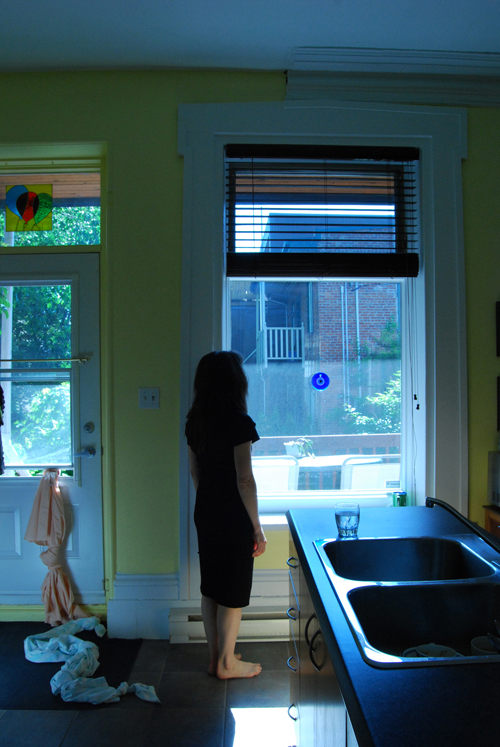 “Juggling is the hinge linking the other two elements of the installation, although the three parts at first seem difficult to put into a meaningful relation. While each uses darkness and light to measure out time, and each invokes cycles—whether of work, of the earth, or of the cosmos—their morphologies, media, and connotations suggest disparity rather than building intimate correspondences. However, a clue to the works' interpretation is offered by the title, Knight of Infinite Resignation, taken from Søren Kierkegaard's Fear and Trembling (1843), a book about the difficulty of faith. In the text, the knight of infinite resignation loves a princess but cannot win her. Although he cannot attain the object of his desire, he does not give up or renounce her: he devotes his life to her from afar, concentrating the meaning of his life and reality in his love for her. For Kierkegaard, the knight of infinite resignation, resigned to the impossibility of worldly satisfaction, represents the last stage of spiritual evolution before faith. Faith itself entails a total acceptance of material existence and is the hardest state to attain. The knight of infinite resignation is stuck in a moment of surrender to and refusal of the vicissitudes of earthly existence, and this seems an appropriate image to guide our consideration of Landry's work. The woman in the video might well represent the knight. Oblivious to the daily life around her, her rapt attention is focused on something beyond our ken. All-consumed by her unknowable passion, she ignores the mundane and material world. She is not tempted by the snake or the chance of escape: this is not a new Eve. She cannot or will not move into either the dark, burning room of hot irons on the one side of the exhibition space or the cold, ethereal room of spinning constellations on the other—a domestic hell or what appears to be a sterile, inhuman eternity. Her own bodily needs are suggested by the glass of water and the dishes in the sink, but whether out of narcissism or faith, she ignores them. Her balancing act between the real and the ideal is shown to be a trap. The glass pane she stares out of becomes, at various moments throughout the day and night, a mirror. Her faith is perhaps only solipsism: for three days and nights she waits, immobile, but no saviour appears. Infinite strength as well as infinite resignation is required to keep the fantasy of resurrection, of redemption, alive.”