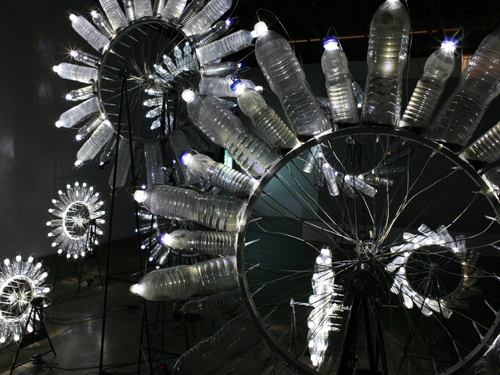 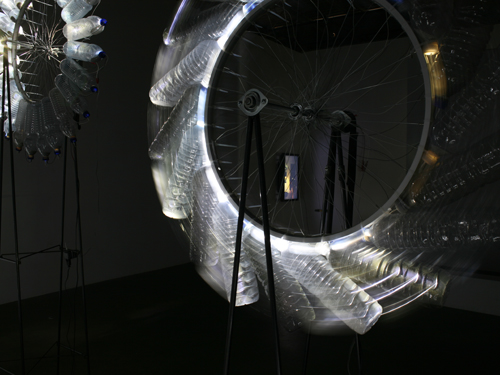 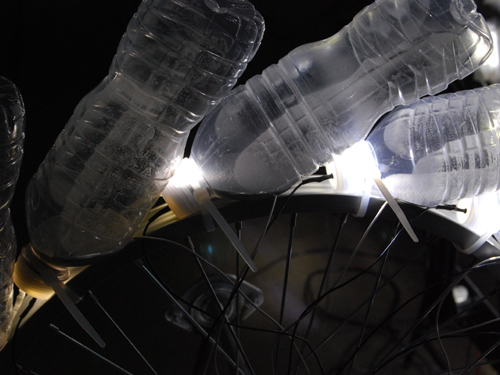 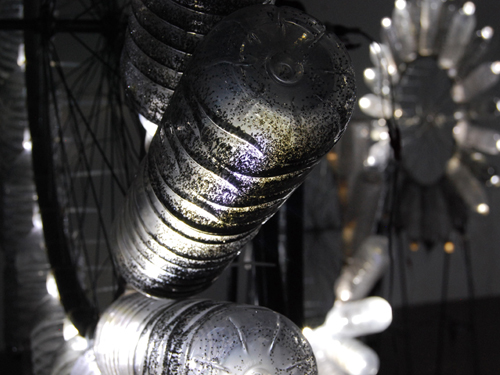 “This intricate web of turning lights and darks operates cyclically, as does the iron installation. Lights appear and disappear with the rotation of the wheels, and the number of the wheels—twelve—references both the hours of the clock and the months of the year. Sand pours down the bottles as though they were hourglasses. But if the windmills suggest human patterns of time, they also allude to perpetual motion machines and thus a different scale of measurement if not a state beyond temporality. Although actually run by electricity, the form of the assemblages, with the running sand acting as weights, evokes the overbalanced perpetual motion wheels (dating to the middle ages, by Bhaskara, Villard de Honnecourt, and others) that were designed, futilely, to rely on inertia to spin forever. On earth perpetual motion seems to be an impossible fantasy, though in space planets and stars spin for unfathomable spans of time without energy input. The tension between human time and eternity is thus condensed into these enigmatic wheels, as is that between human and cosmic scales: the viewer oscillates between recognizing the hand-held water bottle and seeing star systems in their arrangement.

In a number of earlier works, Landry has called attention to the threat to our most precious resource: clean water, which is conspicuously absent from the bottles here. Filled with sand, the bottles are dried up, sterile. In Quebec water is intimately linked to the question of energy, and thus the perpetual motion problem and fantasy. There are 237 bottles here, the liquid contents of which would apparently fill a bath—no more. The short-sightedness of human management of natural resources is made pitifully obvious by the work's evocation of cosmic time, in comparison with which the human lifespan and even the existence of the species seem simply irrelevant. And there is something terrifying about this assemblage, which is so cold and serene, so unperturbed by the viewer's presence.”