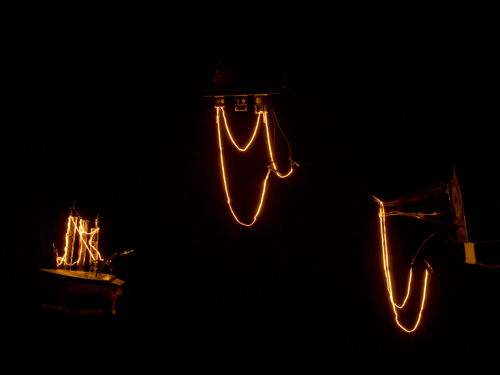 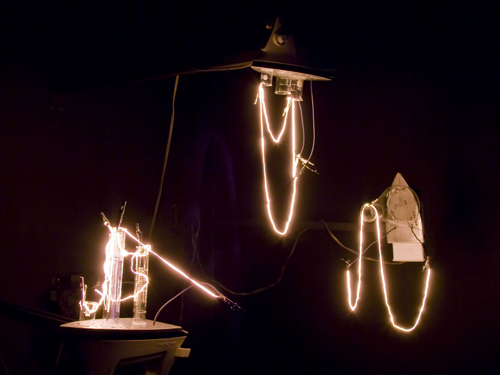 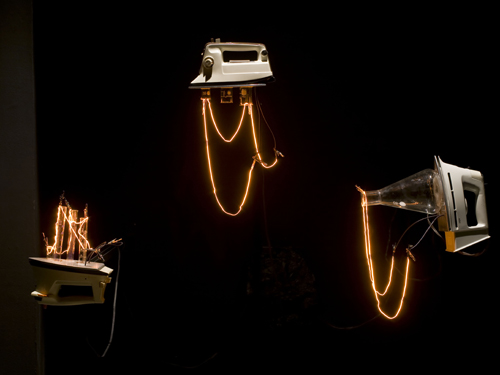 “There are three parts to the installation. The first the viewer encounters, in a small, dark, black-painted room, consists of three little assemblages, arranged in a pinwheel fashion. Various specimens of scientific glassware—beakers, graduated cylinders, and an Erlenmeyer flask—are attached to the flat surfaces of three different irons. Around these Pyrex containers, the serrated filaments found in toasters are wound in irregular patterns. The filaments are connected to the current of the irons, which switch on and off in a slow cycle. Over several minutes, the filaments heat up: a pale glow emerges from the surrounding darkness, building to a burning brightness that illuminates the hitherto invisible glass vials, then slowly fades away again as the wires cool. The white bodies of the irons remain faintly visible even in the darkness. The filaments are twisted and hung in different arrangements on each iron: the leftmost is bent in a small, involuted configuration that looks like a text-an illegible, craggy scrawl; the other two, hung in large swoops, resemble necklace displays in jewellery shop windows. The assemblages can be read simultaneously as literal instantiations of ‘household science’, as an homage to the allure of hot commodity fetishes, and as abstract heat-and-light sculpture-drawings. The objects and their cyclical arrangement suggest the interconnection of different economies and patterns of behaviour. The drudgery associated with ironing gives way, in this reworking of the device, to rewards for good housekeeping (a pretty set of chains) or a freer, if still rather cramped, autographic and expressionist gesture. In short, the installation stages a movement from function to ornament to art. This is a dangerous and delicate experiment, whether one considers it as an allegory of the development of the woman artist, or a purely technical feat in which burning and short-circuiting have been avoided. The viewer is kept at a safe distance by a low wall.”