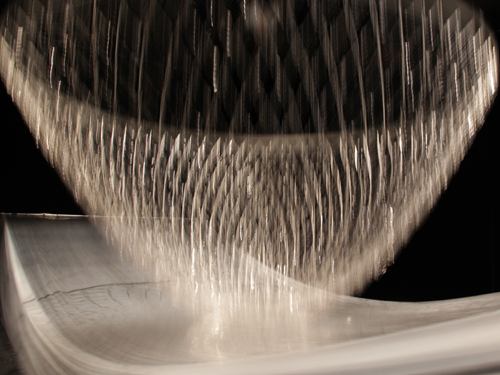 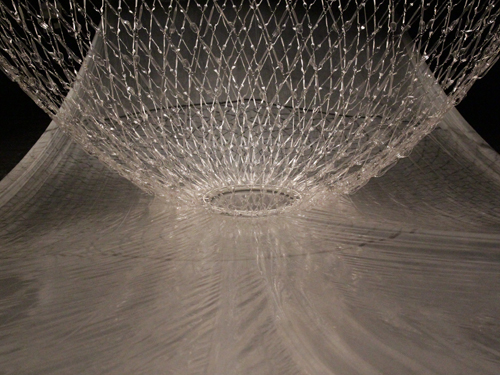 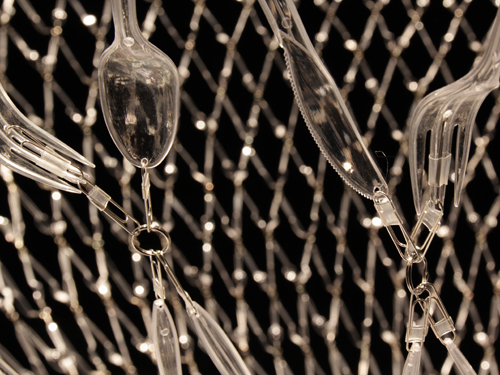 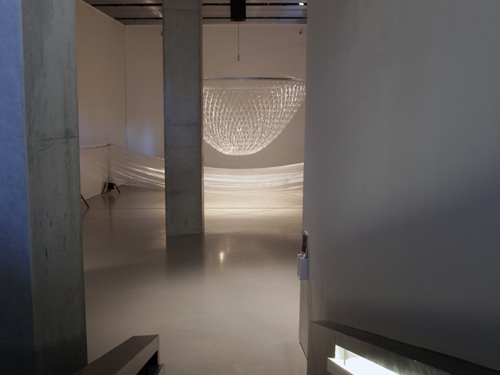 “One definition of the word “exhaustion” is “the total consumption of something.” Landry’s massive constellation of plastic forks, knives and spoons speaks to the act of exhausting in ways that are alternately urgent and enigmatic. Its slow rise and fall echoes the familiar gesture of bringing fork to mouth in the process of eating – repeated innumerable times over the course of a lifetime. Yet in an increasingly disposable culture, this act is often populated by paper, plastic and speed that collectively speak to impermanence – and waste. Does this Exhaustion symbolize the overconsumption of finite resources, or the mystical properties found in a seemingly banal, up-down gesture?

Landry veers to the latter, describing the work as “a strange machine for dreaming space, time and light – from which a thousand stories bubble up.” From this point of view, ubiquitous instruments mutate into an uncanny shape suggesting a chandelier, fishing net and jellyfish. By escaping singular definition, the net of Exhaustion therefore evades its own capture – transcending the assigned function of individual parts to float in magical reassignment. Only when fully spent, does the terrifyingly raw frontier of emptiness begin.”
Steven Matijcio, curator.

“Diane Landry's practice is site-specific. With Exhaustion, she undertakes a radical transformation of the exhibition hall and plays on its various spatial volumes. Visitors are guided and incorporated into movements of exploration, perception, and discovery of both space and the work. Exhaustion reveals itself progressively, step by step. It is a work in sound, shadow, image, reflection, kinetic sculpture, shadow theatre, and environment. Exhaustion is a strange machine for dreaming space, time, and light, from which a thousand stories bubble up. Behind what seems to function as a container, but which could just as well be understood as a chamber, cave, or pit, the artist has suspended a structure made up of an elaborate combination of transparent plastic objects. The artist's inventiveness is seen in the transfiguration of these everyday objects into sculptural elements deployed en masse and led astray from their original utilitarian vocations. Since beginning her investigations of movement, Diane Landry has often called on elementary machines—wheel, screw, pulley, lever, and inclined plane. Her Exhaustion, she foregrounds the pulley, which she has not much featured in previous productions. The work is complex: opening onto various spaces, it can also be looked at from several points of view. The sculpture in its container stands out paradoxically as a flying shape, floating, like a jellyfish. Exhaustion conjures up around it something that hesitates between an aerial and aquatic habitat. Perhaps it is as paradoxical a work as the propeller-driven snowmobile. What kind of exhaustion is Diane Landry evoking with her title?
Nicole Gingras, Manif d'art 6, Machines - The Shapes of Movement, Quebec City, 2012.